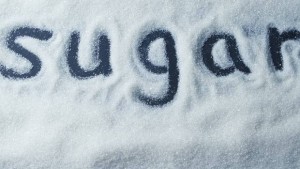 The Globe and Mail did a two-page spread in its Health section called Sugar Verdict, outlining the World Heath Organization’s new draft guidelines for no more than 10% of our daily calories to come from sugar.

Translation: If you drink a single can of pop a day, you’re consuming too much sugar.

The WHO’s proposed guideline changes are in response to the mounting scientific evidence that increased sugar consumption is strongly associated with health risks such as weight gain and tooth decay.
The Canadian government hasn’t made any moves to jump on board though. Maybe because they realize that reducing a complex issue — such as the overall health of a human being — down into a single cause that we can make enemies with is far too simplistic.
In other words, they may be realizing now ( in retrospect) that much of the country’s dismal health can be traced back to vilifying dietary fat back in the 1970’s, before there was conclusive evidence for doing so.
In a way, their reluctance to now jump on the anti-sugar bandwagon (even though there is far more evidence to support its contribution to the matter), is about the most we can hope for from an, “Oops. We were wrong about fat but we’re too embarrassed to admit it” perspective.

Could the government be considering changing their position on saturated fat, another twin villain alongside cholesterol in our beloved heart disease story?

The truth is, I’m very excited and supportive of the proposed directives on sugar, but I want to be crystal clear on one thing. Even if all sides miraculously came to a unanimous agreement about sugar’s role in our obesity and ill health epidemic, I’m not convinced it would change the eating habits of Canadians. At least not in the short term.

Government recommendations and policy change may work to some degree — especially by the time we feel it in our wallets! — but this process will take years, if not decades, to roll out. And in my opinion, as long as processed, sugary foods are available, people will find them regardless of price or convenience.

The bottom line: If you want to enjoy better health today, take full responsibility for your daily habits. Period.

Want to save your own life?
Don’t let these 5 limiting beliefs stop you from eating real food