Many people ask me about skipping or delaying breakfast. They want to know if I do it, and if it’s an effective and healthy strategy for weight management. There really is so much conflicting information and advice.

My answer to the first question is yes. I personally practice intermittent fasting from time to time, and have posted about it many times on my Facebook page.  Perhaps what I haven’t emphasized enough is that it’s an advanced strategy that isn’t appropriate for everyone.

I would only recommend fasting to someone who is fully fat-adapted. And one of the best ways to know if you’re fat-adapted is whether or not you’re hungry first thing in the morning. If you’re hungry first thing in the morning, trying to force yourself to skip breakfast is a recipe for some serious hangry-ness and potential over-eating later in the day (essentially, hormone dysregulation). If you fall into this camp, I would continue to eat breakfast in the morning following my standard real food guidelines. Over time you might notice that you no longer have that starving feeling first thing in the morning, in which case I’d recommend delaying breakfast until hunger ensures naturally. Maybe at first it’s 9 a.m., but over time you’ll notice it extending out later in the morning. Just make sure you have a nutrient-dense meal ready to go for whenever you feel hungry.

Some people never get to a point where they feel like they can skip breakfast, and that is totally okay too. In fact, many experts disagree about the effectiveness of skipping breakfast for women, but that it has some advantages for men. As always, listening to your own body trumps anything that anyone else says — even if they’re an expert.

With all of that said, skipping or delaying breakfast — often referred to as intermittent fasting — has been shown to offer numerous health benefits for fat-adapted people:

Whenever I delay my first meal, I typically still have coffee. I put ~2 teaspoons of coconut oil (some people prefer butter or MCT oil – medium chain triglycerides) and cinnamon into the coffee to further enhance the fat-burning and hormone-optimizing 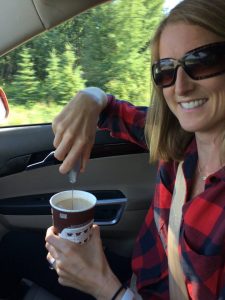 signals I’m trying to achieve. I like to blend it all up with my hand-held coffee frother (like a mini-immersion blender) and it’s really, really tasty. You’re still getting a decent amount of calories, but the idea is that those calories are much more likely to be burned for energy than stored on your body.

The bottom line is that intermittent fasting can have a place in a healthy eating strategy, provided you’re already fat-adapted, you’re eating whole, natural food when you do eat, and you honour and respect your body’s hunger and satiety signals.

Now I want to hear from you? Have you ever tried intermittent fasting, and if so, how did it go for you? I’d love it if you’d share your own experience in the comments below, and I sincerely hope this post has helped to clarify some of the confusion.

Like this post? Want free weekly inspiration to eat, move, and sleep your way to optimal health? As a bonus I’ll send you my e-book, Top 7 Mistakes (even) Health Conscious People Make.